A downloadable game for Windows and macOS

"Those who promise us paradise on earth never produced anything but a hell." - Karl Popper

Its your first day on the job. You have a simulation to run called Farm House. You never thought that it could go so wrong...

PS - Thank you all for the support on my recent projects. What an awesome community we have here on Itch!

Its Time To Chill - https://mager22brophybroncosorg.itch.io/lo-fi-the-game

Hey! so this game really has potential but I really think ya gotta go back to the drawing board on some fundamental system mechanics and the damn lighting system if you dare get within ten feet of any literal object you become face to face with the actual sun, I felt like I was getting flashbanged for simply bumping into a prop or wall1 texture and what's the reason for no pause menu with basic functions like maybe a mouse sensitivity bar or even maybe subtitles anything really so odd how there is no pause menu. I don't want to come off as a hater or pessimistic, there are really cool concepts in this game series but cool concepts can only go so far when your game feels like it was put together with popsicle sticks and cum I mean the whole server room wasn't even real You can walk right through it, was the room an after thought? I would understand that since 99% of every room in this game looks exactly the same. Looking forward for the next title amigo! Fun Fact You can break your own neck if you simply look up and down fast enough, complete immersion I gotta say Shoutout to all the generic gamer youtubers in the comments very unique content fellas stay on the grind!

I sucked at this but the game was good! It was a good sequel to the original. Check out my video and have a good day man.

Reply
GoodKhaos40 days ago
I played both episodes sequentially and really enjoyed both. I hope you have plans to continue the series! I'll definitely be keeping tabs.
Reply
DaRealParadox44 days ago

Also if you enjoyed my content, it would mean a lot if you considered subscribing, but its up to you, have a great day :)

Wow this game is getting really REALLY interesting lol I'm loving the story between these games! I did die a lot and kinda walked outside the map at one point but I loved this!

Now we really know what goes on at Pork production facilities. Very spooky and tense game. Great work just like your other titles. Keep it up!

Dong this one was a little hard. I need to know what is going on at the other location! Great series! Can’t wait for the next one.

Reply
WoodyRun46 days ago
Alright this is awesome. This SCP esque theme you've got going on is so cool and interesting! I can't wait to see more, I'll definitely be playing more of your games. This interconnected world between games is great! I have a lot of issues with the fact that there's no checkpoint system but I see you've already addressed that so I won't harp on it much. Keep it up and thanks for making it!
Reply
Doflanico50 days ago
Nice game !
Reply
Darshit Bharucha51 days ago

i have made a fan art or your game. Plz check it by clicking on the link below.

you fucking bitch you did it

This is the worst horror games ive ever played, it is a walking simulator in its boringness form. You walk to a server room only to realize you can walk right through the whole maze. The only threat is the static enemy from the prison purgatory game. Near the end of the game the hallways become longer and longer with zero locker in between. I was never scared playing this just annoyed. Also he still hasnt fixed the fact that you can turn your head completely upside down.

Sorry you didn't like it man. To each their own I suppose.

The game wasn't too challenging but it was just hard enough to feel the heat of the two monsters roaming in the facility. The ambience and environment were really on point and was so spooky and scary. The mixture of the blurry pixelated graphics with the sinister and scary music really went so well together to enhance everything and make it so scary and super rewarding to getting to a locker just in the nick of time!

The stompy monster was really, really well made! It was super spooky and the stomps really felt scary when the player hears them coming towards them. The kids laughing, I thought did not initially did not fit in with the game, it grew on me and was a neat way of making the player wait and not just run out of the closet as well as provide the spoops well!

The goal of going around the facility was well done again as there was a story behidn it and it did make sense to do all that as the superiors were telling you to. The things escaping also was well done and had great story reasons and really did tie in well with the whole game! The ending could have been better rather than just instantly kill the player, but it was a really well crafted game!

My only suggestion would be to make the voices of the people speaking through the speakers a little more louder as it was super difficult to understand the "boss" because of the voice changer but the other person was more understandable!

A lot of love and hard work went into it and it's super apparent! It really shows as it's a really, really well made game and it's actually super spooky and really scary! Well done and good luck on expanding the universe!

Reply
CrazyCheesePuf YT53 days ago
I loved the SCP theme to the sequel of the legendary "Food For Pigs"!!! Anything SCP and I'm IN THERE!!! Although the game could use some checkpoints my boy... I can't wait to see where this series of games end up going! Keep up the great work Matt!

Reply
TsukuruHouse53 days ago
It's become a sf horror!
Reply
CAMurray54 days ago

I haven't played the game, but I have seen a video of someone who has played both 1 and 2, and they complained about the second game taking you back to the beginning when you die, and also the unskippable dialogue. I think a checkpoint system and the ability to skip dialogue would go a long way, don't you?

Absolutely agree! I've made that no checkpoint mistake before, and there will be checkpoints in the future! As for skippable dialog itll be a case by case basis because a lot of the time my dialog is playing while the player has full control of their character, but in cases where the character is frozen I will add a skip feature.

All right then, thanks for the reply.

Reply
BetaHunter54 days ago
Much the same as last time, but a lot more interactive gameplay.
Reply
Slayder0407@gmail.com55 days ago

took a big turn from the previous game but still had some fun. I definitely did not feel 100% safe during any part of the game so that was very well done. Second game in the video around the 5:40 mark

Way different than the first game but also very interesting...am curious what happens next...

very good upgrade of the first game, can't wait to see more from you

Thanks a lot man. I'm working on a game that I might call E.O.Demon or something. It'll be a bomb defusing horror game, I think its a fairly original idea.

Nice, i checked your page and saw that you have alot of other good games i have to try.

Alright so let's say that this game somewhat inspired from SCP universe, where another foundation doing experiments and stuffs, you work for this foundation and in your first day, you have to face a very common thing - containment breach, which anomalous entities are freed and cause chaos. The idea is not bad but the way of setting the workplaces, doors, lights, and other things seem to be a bit off, though the experiment is going to an end soon and the foundation will wipe out all of the evidences. I really hoping to see the next episode. I also followed you btw.

Nice game. It was nice seeing the guard again.

yO, you should add sprint bar or something to the game, i've been trying to beat the game for the 3rd times but the entity outrun me easily and i couldn't proceed to the next task or exit. The entity can also spot me from pretty far away and comes back after i see it goes opposite direction.

Gotcha dog, you can hide in the lockers and wait a few seconds until it runs away. I didn't want the game to be too easy.

i did hide in the lockers, but the entity stayed too close even after the red lights. When i got to a room with lights on both sides on the ground, the entity chased me right after i press F to pick up the thing, didn't even let the speaker finish talking, i couldn't even reach the locker at the left 2 times. I understand you dont want it to be too easy, but at least let the speaker finish its job, i often die just because of staying for awhile just to hear what it says.

also it would be nice if there's autosave, especially after getting a task done.

I've just added an easier version of the game where you have increased speed and the entity has decreased speed. This should resolve things.

thanks for that, but is there anyother ending beside turning the lever down and then got betrayed? 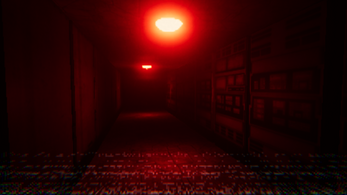 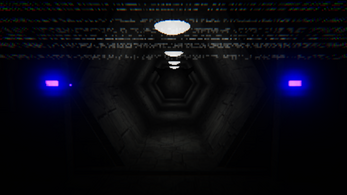 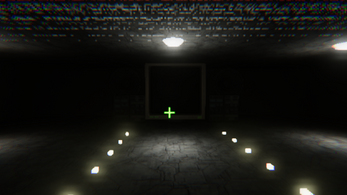 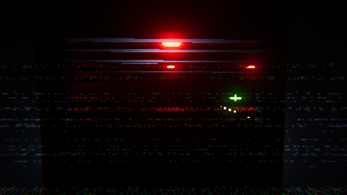 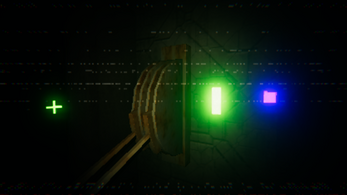